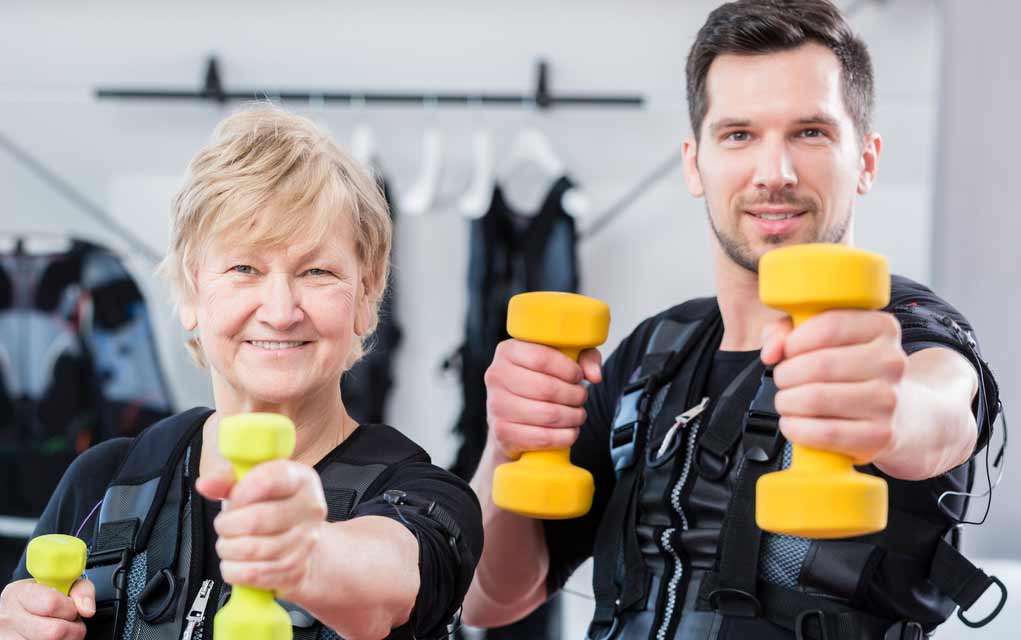 Although we've come a long way from the days when no one thought it was a real disease, we still have a long way to go in terms of treatment. Fibromyalgia pain is an increasingly common form of chronic pain that can leave those with the disease in a seemingly endless limbo of uncertainty and anguish. Current treatment options are limited, so many people are left struggling to function with the condition. But breakthroughs do happen and one recent discovery has led to relief for many. A drug-free option, muscle stimulation therapy is receiving a lot of attention, and it seems, deservedly so.

Current fibromyalgia treatment options range all over. But from anti-depressants to opioids, they may cause potentially harmful side effects. And despite treatment, many sufferers still struggle to function.

But hope may have arrived in the form of muscle stimulation therapy that may help relieve muscle pain and fatigue without the numerous side effects that can come with current treatments. It works by triggering the nerves, forcing pain receptors to compete along the pathways to the brain, thereby reducing pain perception. Let's look a little closer.

Fibromyalgia occurs most frequently in people with rheumatic disorders like lupus, osteoarthritis and rheumatoid arthritis. Some people who develop fibromyalgia may seem otherwise perfectly healthy, which can make symptoms unexpected and especially puzzling. It sometimes strikes males, teenagers and seniors, but the disorder affects middle-aged women more often than any other demographic.

Researchers are still trying to pinpoint the exact cause of fibromyalgia pain, but some evidence suggests it results from an altered interpretation of nerve signals in the brain. Simply put, people who suffer from fibromyalgia may feel significantly more pain than the average person, even in the absence of external triggers. This can make managing the condition extremely difficult.

Current fibromyalgia treatments typically include one or more of the following approaches:

The results of these treatments are often mixed at best, and highly variable by patient, and the side effects may outweigh the potential benefits in many cases. Opioid treatment, for example, can be provably damaging, resulting in worsened chronic pain in the long run. This is because opioids can exacerbate the problems in the nerves believed to cause fibromyalgia by further reducing pain tolerance.

Muscle stimulation therapy, also called transcutaneous electrical nerve stimulation (TENS), works by sending electrical signals through the muscle, dampening the pain response. Not only does it appear to reduce pain and improve movement, but TENS therapy may also improve fatigue levels. Side effects are minimal, with the most common being pain from the device and irritation from the electrode pads.

TENS therapy may work under the same principles used in the “gate control” theory of pain. According to the theory, pain receptors must compete with other nerve receptors in a given area. Stimulating sensations other than pain may, therefore, reduce a person’s pain perception. Acupuncture, which triggers nerves using fine needles, is another example of a pain-reduction approach that relies on gate control theory.

Fibromyalgia pain is difficult to overcome, but muscle stimulation therapy could help to make it more manageable in some cases. Moreover, TENS units are readily available and don't require a prescription for basic units. If you have fibromyalgia and have been struggling to control the pain, it may be worth it to talk to a doctor about TENS therapy and whether it might work for you.

Written by Wellness Editor
Wellness Exists to Empower Health Conscious Consumers. Wellness.com helps people live healthier, happier and more successful lives by connecting them with the best health, wellness and lifestyle information and resources on the web.
View Full Profile Website: http://www.wellness.com/
Comments
http://www.wellness.com/blog/13298523/reduce-fibromyalgia-pain-with-muscle-stimulation-therapy/wellness-editor
I want to thank Dr Emu a very powerful spell caster who help me to bring my husband back to me, few month ago i have a serious problem with my husband, to the extend that he left the house, and he started dating another woman and he stayed with the woman, i tried all i can to bring him back, but all my effort was useless until the day my friend came to my house and i told her every thing that had happened between me and my husband, then she told me of a powerful spell caster who help her when she was in the same problem I then contact Dr Emu and told him every thing and he told me not to worry my self again that my husband will come back to me after he has cast a spell on him, i thought it was a joke, after he had finish casting the spell, he told me that he had just finish casting the spell, to my greatest surprise within 48 hours, my husband really came back begging me to forgive him, if you need his help you can contact him with via email: Emutemple@gmail.com or add him up on his whatsapp +2347012841542 is willing to help any body that need his help.

Posted by Sharon Wayne
http://www.wellness.com/blog/13298523/reduce-fibromyalgia-pain-with-muscle-stimulation-therapy/wellness-editor
Hello Readers .I am very happy to share this amazing testimony, i was hurt and heart broken when my husband leave me for another woman i was confused and didn't know what to do, i loved him so much, i tried all i could to make her come back to me but to no avail, on one faithfully day as i was coming from work i met a friend of mine whom i explain my problem to, and he told me of a spell caster and a good spiritualist called "Dr. tunde whom also made her pregnant when she was looking for a child, i contacted the spell caster through the email she gave to me, and the spell caster told me what to do and i did exactly as i was told, to my greatest surprise, my husband come back to me and started apologizing and now she is with me brothers and sisters if you know you are passing through any kind problem contact him and i give you 100% guarantee that he will solve your problems. You can contact him via his email: babatundesolutioncentre1 @ gmail . com or via his whats-app: +2348143581382 Also specialize in treating all kinds of illness, HERPES VIRUS, HEPATITIS B, CANCER, BRAIN DISEASE, INFERTILITY, DIABETES AND MORE
Posted by christabel tammy
http://www.wellness.com/blog/13298523/reduce-fibromyalgia-pain-with-muscle-stimulation-therapy/wellness-editor
My names is Elizabeth Wong want to testify about the great spell caster called Dr Osasu my husband and i have been married for 8 years now we don't have a child and the doctor told us i can't give birth because my womb have been damaged due to wrong drugs prescription this got me so worried and my husband was not happy so he decided to get married to another girl and divorce me i was so sad i told my friend about it she told me about a powerful spell caster she gave me his email address well i never believe in it that much though i just decided to give him a try and he told me it will take 24hrs to get my husband back to me and i will get pregnant i doubted him the 3rd day my husband came back to me and was crying he said he didn't want the divorce anymore 3 weeks after the doctor confirmed that i was pregnant he can also help you contact him at

WhatsApp +2347064365391
Posted by Elizabeth Wong
http://www.wellness.com/blog/13298523/reduce-fibromyalgia-pain-with-muscle-stimulation-therapy/wellness-editor
I have used TENS and wasn't helped by the use of this product.I think you should be willing to try it.
Posted by jowalczak@att.net