Directory > Blog > Are You a Night Owl? It Could be Killing You

Are You a Night Owl? It Could be Killing You 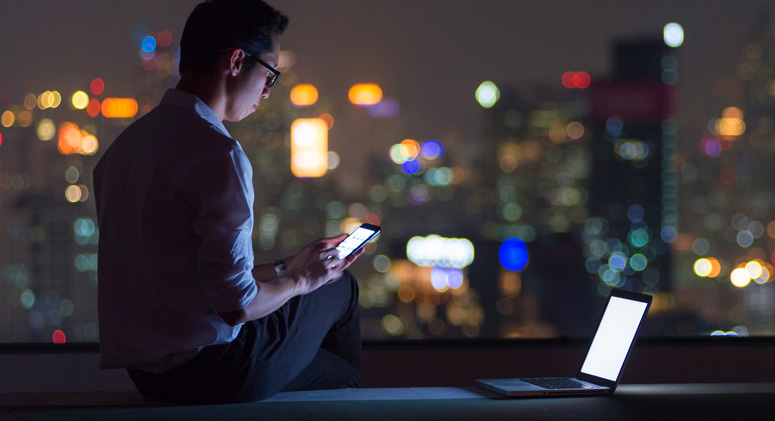 Do you know someone who loves the night? Maybe the sweet silence of 3 a.m. is appealing to them. Perhaps they work nights or study late. A Korean study found a causal relationship between being a night owl and metabolic disorders. In addition, a recent study conducted by the UK Biobank sought to determine whether there could be a connection between sleeping schedules and mortality rates, and the results might be compelling enough to make people rethink bedtime.

Of the groups, those who self-identified as “definite evening” people (night owls) appeared to be at highest risk of developing a number of different health issues, including being at a 10% higher risk for early death than people who go to bed at a more normal time and are early risers. In addition, mental health disorders, diabetes, gastrointestinal disorders, metabolic disorders, neurological disorders, and respiratory disorders were also found to be more common in night owls than in other groups.

“Moderate evening” people were found to be at a relatively increased risk for health issues, albeit lower than that of their night owl counterparts. Some of these related health issues, such as cardiovascular disease, could increase a person’s overall risk of death.

Researchers accounted for other variables that could affect health and lifespan, such as smoking, weight, sex, age, and socioeconomic status, leaving chronotype itself as a potentially important factor. However, the exact nature of this relationship is still up for debate. While some believe "definite evening" people may face increased health risks due to simply being awake when they should be sleeping, others attribute it to the stress put on the body from trying to adapt to “normal” sleep schedules.

Many insist there are clear genetic components to chronotypes, so that some people are naturally early birds and some are naturally night owls. Some researchers believe it’s possible to retrain a person’s chronotype, whereas others believe it is, for the most part, genetically fixed. Most agree, however, that getting regular, scheduled sleep is important above all else.

Written by Wellness Editor
Wellness Exists to Empower Health Conscious Consumers. Wellness.com helps people live healthier, happier and more successful lives by connecting them with the best health, wellness and lifestyle information and resources on the web.
View Full Profile Website: http://www.wellness.com/
Comments
http://www.wellness.com/blog/13289061/are-you-a-night-owl-it-could-be-killing-you/wellness-editor
It’s almost impossible to get a refund from crypto loss. However in recent times it’s possible to get a wallet address reported and if funds are kept in a regulated exchange, you might stand a chance of getting such assets frozen. I’ve referred a couple of people to Hacktified dot com and I affirm that they all have great testimonies. I’d advise you make contact with them and get your assets returned back to you. cheers!
Posted by James
http://www.wellness.com/blog/13289061/are-you-a-night-owl-it-could-be-killing-you/wellness-editor
Have you ever gotten your bitcoins stolen from your wallet or invested in an ICO that turned out to be a scam, you are not alone because this happened to me too. I initially lost $90,000 in just 3 months from Cryptoallday, I contacted the authorities and they referred me to a bitcoin recovery company who helped me recover all my funds within less than 2 days... I'm speaking out to improve our awareness of these cryptocurrency thieves and help you if you have been a victim yourself. Simply send them an email Recoverbtchelp07 gmail com
Whatsapp or text: +1 315 784 1311
Posted by jeff packer
http://www.wellness.com/blog/13289061/are-you-a-night-owl-it-could-be-killing-you/wellness-editor
I was scammed for a huge amount of money, devastated I started to search for help. Someone referred an expert and private investigator, Optimus. I emailed him and as soon as I explained what had occurred he told me immediately that it was all a scam. He gathered my case together and within a few days we got a result and I got all of my money back! Optimus was amazing, professional and efficient, he guided me through the whole experience. I cannot thank him enough - I can now live again! His mail info is Recoverbtchelp07 at gmail DOT COM
Whatsapp or text: +1 315 784 1311
Posted by Lax Mac
http://www.wellness.com/blog/13289061/are-you-a-night-owl-it-could-be-killing-you/wellness-editor
Thank you so much to the great team at Cyber Credit Guru for helping me achieve my dream of becoming a first time home owner! Also, for the purchase of my new family car! Thank you for your time and dedication on boosting my score and removing derogatory items, collections and few student loans! Mr. Jason was very thorough through the process and took care of all my questions! He made sure I got the best deal for my car and now I and my family get to enjoy it with a low payment! We are grateful to have gone through this process with them! I recommend Cyber Credit Guru to everyone who needs help with their credit! Guys, IT IS WORTH IT! Go ahead and do it!!

Email: C Y B E R C R E D I T G U R U @ G M A I L. C O M
Posted by Jessica Hilary
http://www.wellness.com/blog/13289061/are-you-a-night-owl-it-could-be-killing-you/wellness-editor
Special thanks to HACK VANISH, a professional hacker I’ve been hiring for the past 2 years because, I find him to be an outstanding hacker who has aided me in various hacking related issues, ranging from fixing my poor FICO credit score of about 437 TransUnion, 462 Equifax to 802 plus excellent score, tracking my cheating husband’s phone and currently has helped me recover my lost crypto funds from an online scam investment I recently ventured into, I must confess he is the best, quite brilliant, ever since I discovered him through a positive review I saw on Wallet Hub and reached out to him via Email: HACKVANISH @ GMAIL. COM, and Phone: +1(747) 293-8514, to which he responded in less than 10mins, I have never regretted working with him, he’s been quite helpful and highly efficient. I Would recommend his services to anyone without hesitation.
Posted by Layla Cole
http://www.wellness.com/blog/13289061/are-you-a-night-owl-it-could-be-killing-you/wellness-editor
I decided to buy a house here in Denmark,we agreed to do the transaction via bitcoin. The home owner sent me the wrong wallet address which I made a payment of $485,000 worth of Bitcoin to,we later realized the mistake after the payment had been made. All my friends told me to forget about the money and that it can't be recovered again,I refused to accept that and went into a thorough search online to see if anything can be done about it. luckily for me i saw reviews about this recovery expert, i contacted him on BACKEND RECOVER at RESCUETEAM dot com, explained what happened to him,sent him the wallet address and the hash,i can happily tell the whole world today that he has recovered my lost Bitcoin back to my Blockchain and Trustwallet account. I have not met someone as sincere as him before
Posted by Lasse Toft
http://www.wellness.com/blog/13289061/are-you-a-night-owl-it-could-be-killing-you/wellness-editor
BACKEND RECOVER @ RESCUE TEAM . COM services are one of a kind. I came across their contact in my search for help recovering my stolen coin, and it was helpful. I invested $82,000 worth of coins with Coin-Flip 3 months ago but they ripped me off the return of investment and the investment capital as well. Thanks to theM for recovering my money back. You can use their help should you find yourself in a similar situation.
Posted by Paul Latham
http://www.wellness.com/blog/13289061/are-you-a-night-owl-it-could-be-killing-you/wellness-editor
Bull is right. I was born late in the evening and I have always been a night owl. I think that is why. This is just someones idea to get everyone in line. I am 70 years old and have none of those ailments listed. I enjoy the quiet of the early morning. I am retired so it doesn't matter what time I get up in the morning...or afternoon. I have never felt my best early in the morning. It takes to about 3pm for me to be fully awake and feel alive. I love my life and my sleeping pattern just like it is. I get my rest and my husband get his quiet mornings. It's a win win in my book.
Posted by Linda
http://www.wellness.com/blog/13289061/are-you-a-night-owl-it-could-be-killing-you/wellness-editor
Bull. I have been a true night owl all my life. Even in school I was sleepy, especially in the afternoon and did my best homework at night. I tried working days for three years and was tired all of the time and put on a lot of weight. I spent the rest of my working career as a nurse on the midnight shift and felt much better, lost weight, was active and usually slept 7 1/2 hours from mid afternoon to when I had to get up to go to work. I am retired now and still keep a night owl schedule though slightly different, I go to be around 4 am and get up between 11 and 12 noon. I feel great and am still healthy and keeping my mind active by taking classes at the local university. According to some doctors I have a alternate circadian rhythm which makes my schedule fine for me.
Posted by Tlyna
http://www.wellness.com/blog/13289061/are-you-a-night-owl-it-could-be-killing-you/wellness-editor
Well they have obviously studied this so in these cases, no. I have chronic pain. I rise at 4am. 😁
Posted by Mary
View all 13 comments

5 Surprising Ways You Could Be Harming Your Heart
Wellness Editor