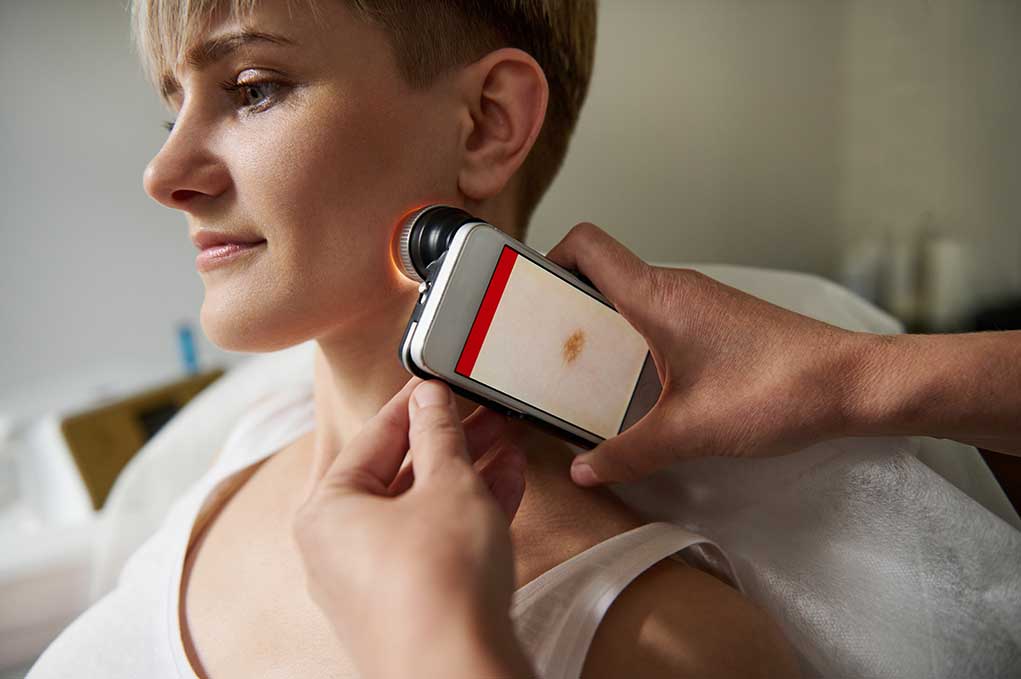 Maybe it’s a mottled brownish spot of skin that’s changed size or color, or a mole that’s suddenly become uneven and asymmetric. And suddenly you're worried. Maybe we have skin that developed new coloration ranging from white, pink, and red to bluish-black. Skin cancer is a serious health concern, and it doesn’t discriminate. Anyone, at any age, can be affected. Let me say that again: anyone can get skin cancer at any age or time. It's one of the most deadly cancers primarily because it goes undiagnosed for so long. Catching and diagnosing skin cancer early may be the best way to reduce its impact and keep it from causing loss of life.

How Common Is Skin Cancer?

According to the American Cancer Society, nearly 5.4 million skin cancers are diagnosed in the United States every year. These occur in approximately 3.3 million people because many people have more than one. Nearly 80% are basal cell cancers, while the other 20% are squamous cell cancers.

Nearly 2,000 people die annually from these cancers, and many others must undergo surgery, chemotherapy, and other treatments to remove the cancer or prevent its spread. When skin cancer is caught early, the chances of metastasis, a state where cancer spreads to other areas, are much lower, saving lives.

How Treatable Is Skin Cancer?

The good news about skin cancer is that it’s generally very treatable. The bad news? If left untreated, skin cancer can spread, causing cancer to grow in other areas of the body. That spread often causes serious health problems because treating cancer in other body areas isn’t always as successful as most skin cancer treatments.

Skin cancer is typically treated through Mohs surgery to remove the cancerous area. Then a pathologist examines the tissue to ensure the removal of all the cancerous cells. If doctors find more cancer, they may need to remove more tissue until the surrounding area is clear of cancerous cells. Using this step-wise process allows doctors to remove less tissue, causing less scarring and lowering complication risks.

How Important is Early Detection?

There is value in early detection for nearly any medical problem. When it comes to skin cancer, 99% of cases are curable when caught early. But that doesn’t mean we shouldn’t take it seriously. "Caught early" is the key. If there are changes to our skin, we should have them looked at by a medical professional as soon as possible.

Leaving a problem area alone and just hoping it’s nothing serious is common but has the potential to be deadly. Early detection and treatment really are key to good outcomes.

Any changes to the skin can be a problem, which is why a skin screening by a dermatologist is always a good idea. That’s especially true for very light-skinned people, those who have (or had) bad or frequent sunburns, and anyone who notices lumps, bumps, scaly areas, or moles changing in size or color, or other potential skin cancer signs. As we mature, it’s a very good idea to consider booking an annual dermatology appointment to stay on top of skin changes as they arise.

The skin is definitely one of those areas where we don't want to pore over pictures on the web and self-diagnose. Let the professionals look at it. Saving lives is the goal of early skin cancer detection. How quickly we detect skin cancer may very well affect the degree and invasiveness of treatment. People who seek prompt treatment may require less surgery, aftercare and monitoring in the future, which may help them get back to living their lives with fewer worries about the health of their skin.

Written by Wellness Editor
Wellness Exists to Empower Health Conscious Consumers. Wellness.com helps people live healthier, happier and more successful lives by connecting them with the best health, wellness and lifestyle information and resources on the web.
View Full Profile Website: http://www.wellness.com/
Comments
http://www.wellness.com/blog/13306681/catching-skin-cancer-early-saves-lives/wellness-editor
how i got my Ex lover back after a divorced by the help of DR NCUBE a marriage/relationship specialist. contact him if you need help WHATSAPP DR NCUBE ON +2348155227532
his email is..... drncube03@gmail.com


he also have #herbs for
#hiv/aids
#cancerdisease
#fibroid
#diabetes
Posted by Sharon
http://www.wellness.com/blog/13306681/catching-skin-cancer-early-saves-lives/wellness-editor
Thank you SO much for this article that has given me the kick in the pants to make that screening appointment.
Posted by Christine