The Real Reasons Vaping Is Terrible for You (and the Planet) 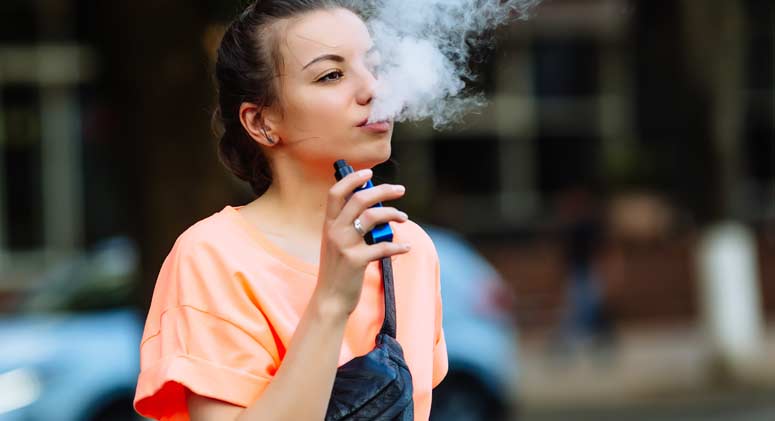 I have to be honest here—I have never smoked anything.  Ever.

Nor have I ever “vaped.” When vaping become increasingly popular after its inception in 2003, I wasn’t convinced e-cigarettes were any better than cigarettes, despite people saying that they were.

Unfortunately, adults and kids alike are often under the impression that vaping is a healthier version of smoking cigarettes. However, this harmful habit isn’t just jeopardizing your health, but contributing to unethical animal experiments and polluting the environment.

With the Food and Drug Administration’s recent crackdown on e-cigarette companies for selling their products to youth, vaping has come under scrutiny once again for its detrimental health effects.

These are the real, research-backed reasons why e-cigarettes are terrible for you...

Heavy Metals Are Present in E-Cigarettes

According to Johns Hopkins Bloomberg School of Public Health, vapers are inhaling “high levels of toxic metals” in e-cigarettes.

Where exactly are these metals coming from? The coil in e-cigarettes that heats the liquid you inhale actually creates the vapor and heavy metals can leach into the vapor before you inhale.

Before we go any further, however, I should clarify that it’s actually an aerosol that vapers are inhaling, not a vapor. So the entire term “vaping” is actually founded on a misconception!

The effects of heavy metals on the body can be numerous. Inhaling cadmium can cause severe damage to the lungs, gastrointestinal issues, and kidney problems. Chromium can damage DNA while lead can damage the reproductive system and nickel can increase your risk of lung cancer.

Apparently, e-cigarette brands themselves don’t test on animals. I know, I was shocked to find this out, too. I contacted four manufacturers of e-cigarettes (V2, Halo, JUUL, and MigVapor) and they all assured me that they do not test their products on animals and the FDA does not require them to.

However, these devices are still contributing to animal studies where rodents are forced to inhale the aerosol for hours every day.

It’s well known that monkeys, dogs, cats, rats, and mice are and have been subjected to tobacco research for traditional cigarettes. A silver lining of e-cigarettes is that newer, more accurate testing methods, such as in-vitro tests, are becoming a central player.

Animal testing tends to be expensive and largely inaccurate, making it wasteful and inhumane for everyone.

E-cigarettes present an increased risk for both acute and chronic disease. For instance, acute respiratory distress syndrome, also called wet lung, can happen due to chemicals present in e-cigarettes. Wet lung induces an immune response in which fluid accumulates in the lungs and respiratory failure can follow.

E-cigarettes have also been shown to increase your risk of diabetes, high blood pressure, ADD, and even your risk for becoming addicted to other drugs. The nicotine in e-cigarettes also increases your heart rate.

Other chemicals in e-cigarettes, including diacetyl, can cause permanent damage to the lungs via bronchiolitis obliterans, a respiratory condition that can cause scarring of lung tissue, which blocks the airways of the lungs.  However, long-term studies are not available, making e-cigarettes a dangerous trend that will take years to fully comprehend.

It’s true that e-cigarettes have the potential to be more eco-friendly than traditional cigarettes; however, they’re still toxic to the planet, especially if people don’t dispose of them properly.

So how can you dispose of e-cigarettes to help reduce their impact on the planet?

The battery should be disposed of as electronic waste (you can research drop-off points here). You can recycle the actual bottle that holds the liquid whether it’s plastic or glass. The coil can also be recycled—so don’t just throw the e-cigarette away when you’re done with it. These devices can leach heavy metals into the earth which can end up in our water supply.

Some e-cigarette companies will even accept the device back. You can review the policies with the manufacturer to see if they will recycle the e-cigarette for you or if you should recycle it yourself.

Everyone knows that cigarettes can cause bad breath, gum disease, hairy tongue, and can turn your teeth yellow—yikes!

However, don’t turn to vaping just yet. E-cigarettes still contain nicotine, which can dry out the mouth, therefore causing bad breath. Nicotine can also prevent the gum tissue from receiving the proper blood supply, which not only deprives the gum tissue of nutrients, but can also cause gum disease to go undetected.

Vaping might be slightly less toxic than cigarettes, but with similar formaldehyde exposure, heavy metal exposure, and the same effects on people breathing in the vapor secondhand, it’s hard to argue that these devices are safe for anyone.

Written by Jenn Ryan
Jenn Ryan is a health and wellness extraordinaire who's fascinated by secret truths. She was last photographed at a tea shop in Washington DC wearing way too much glitter.
View Full Profile Website: http://www.thegreenwritingdesk.com/
Comments
Be the first to leave a comment.

5 Surprising Ways You Could Be Harming Your Heart
Wellness Editor