Directory > Blog > Ready to Make an Impact After Death? Here Are Your Green Burial Options

Ready to Make an Impact After Death? Here Are Your Green Burial Options 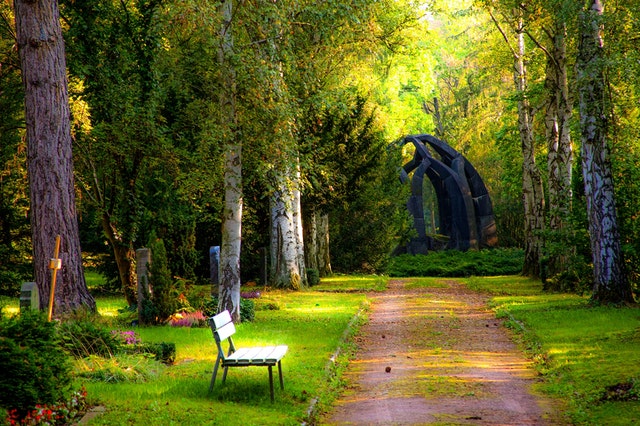 Admittedly, I’ve been thinking of my own death for a long time, since I was a teenager. I knew then that one day, perhaps one day soon, I would die.

Today, I’m more conscious of my impending death than many people my age, especially when it comes to being buried.

I’ve never wanted to be buried. I hate the idea of being pumped full of chemicals, trapped in a box, and left to poison the earth while I rot.

In this life, we have the chance to positively impact the world in which we live both before and after death. So here’s your chance to think about dying and arrange a green burial for yourself with the following options!

Coeio is a company that has designed what’s called the Infinity Burial Suit. Made from organic cotton, this suit is actually designed to turn you into something of a compost pile while eliminating toxins and contributing to the local flora.

Here’s how it works: the deceased body is dressed in this zero-waste suit that’s completely biodegradable. The suit contains mushrooms and microorganisms that help decompose the body, neutralize toxins, and feed plant life. Pretty cool, right?

Coeio also makes an Infinity Burial Shroud made from organic cotton and functions exactly as the suit does. Both suit and shroud are $1500, which makes it cheaper than the average coffin, which costs about $2,000.

This cost includes an educational session—you have the choice of doing it one-on-one or in a group—about the suit.

These include fun materials such as bamboo, seagrass, wicker, willow, and even wool. These caskets are actually relatively inexpensive when you consider that caskets can cost upwards of $10,000.

Why would you want a biodegradable casket as opposed to a regular casket?

Consider a traditional casket: it’s made of wood that came from who-knows-where. The wood is covered with a veneer to make it look nice and shiny (this veneer is toxic). It also has hinges, which are made of metal, and is typically lined with polyester and other synthetic materials that contain additional toxins.

You really don’t even need to be buried in a coffin. It’s legal to bury someone without one. Without a coffin, the body will decompose faster and more naturally.

Going with a coffin-less burial is also a lot cheaper. You’ll only need to pay for the opening and closing of the grave in addition to the burial plot.

Many people are surprised to find that no state actually requires embalming except under specific circumstances, such as if the body died of an infectious disease or if the body needs to be transported to another state. With a speedy and local transport and burial of your body, you can go sans coffin and return to the earth naturally.

Go to a Green Burial Site

Instead of going to a traditional graveyard, you have the option to be buried at an approved green burial site, which encourages the growth of trees, plants, and shrubs. You can also be buried in a biodegradable coffin or a compost suit as we discussed above.

Be Part of a Body Farm

Body farms are pretty cool and they do some beneficial work. This is similar to donating your body to science but your body is studied in a specific scenario to see how it decomposes.

The researchers who work at body farms (for example, The University of Tennessee Knoxville Forensic Anthropology Center) study how decomposition occurs which helps forensic scientists and criminal investigators to know when a body died such as in homicide cases.

The bodies may also be used to help train dogs to find human remains. All in all, there are several cool things that may happen to your body when you donate it to a body farm.

Donation cost is free, and while some of these facilities will pick a local body up, your family may need to arrange for transportation of your body, which is an added expense that could total over $1,000.

It turns out donating your body to science is pretty cool.

In the olden days, only the poor or unclaimed bodies were sold to doctors to experiment on. These days, body donation for medical research is a much more common and revered practice.

Donation is free if you qualify, which basically just means you don’t have any infectious diseases. Your family can simply call the company when you die, and they come to pick up your body. Science Care is one such company.

Donating your body has several benefits:

Donating your body is a noble and wonderful thing to do!

When it comes to deciding what to do with your body after death, it can be immensely helpful to both your family and the planet to consider your burial now and make your wishes known. Most of these options are cheaper than a traditional burial and certainly benefit the planet more. Consider green burial options to continue your positive impact on the earth after death!

Written by Jenn Ryan
Jenn Ryan is a health and wellness extraordinaire who's fascinated by secret truths. She was last photographed at a tea shop in Washington DC wearing way too much glitter.
View Full Profile Website: http://www.thegreenwritingdesk.com/
Comments
Be the first to leave a comment.
5 Habits to Lose Weight While You Sleep
Wellness Editor

Stop Working Out and Play Instead
Gina Fontaine