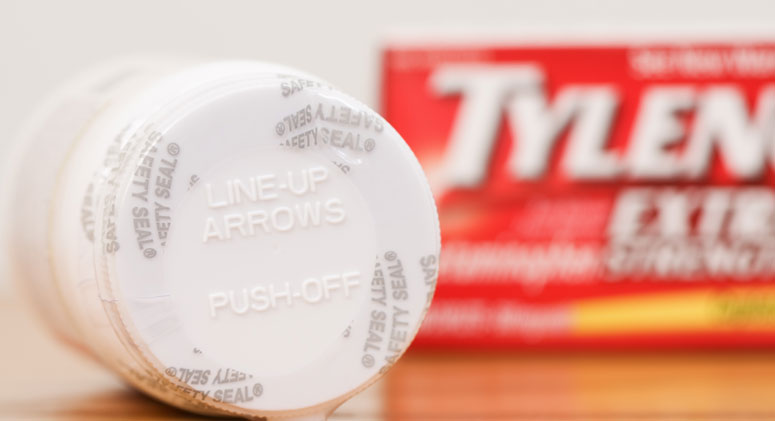 Get to Know the Tylenol Toxicity Warning Signs.

Breathing Difficulty, Swelling or Rash, Grey Color Stool, or Yellowing Skin are ALL signs of Tylenol/Acetaminophen toxicity and potential liver failure. Even non-drinkers are at risk.

By now you have probably heard that Tylenol (or, more specifically, acetaminophen) can damage the liver. In most cases, damage to the liver is thought to occur because of over-dosing, either accidentally or by design (as in sucide attempts). Problems can also arise if people drink alcohol while taking this drug, use more than one medication containing acetaminophen (thus possibly surpassing the recommended dosages without realizing it), use acetaminophen while pregnant, or take this medication in combination with other drugs that bring about dangerous interactions.

Because acetaminophen is such popular medicine, everyone needs to stay informed on the latest advice in order to avoid complications.  Liver damage because of this drug is not only common but it leads to over 100,000 phone calls to poison control centers, over 60,000 ER visits, and many deaths each year; in fact, liver damage due to Tylenol is one of the leading causes of liver transplants here and abroad.

The acetaminophen/liver damage connection, therefore, is not only important news, it's also a very interesting phenomenon in bio-medicine. How so? Well, Tylenol has been used for a very long time--in fact, it has an almost impeccable record, were it not for this side-effect/complication. The fact is that acetaminophen is still considered an extremely safe drug, as long as it is used responsibly and under the watchful eyes of healthcare professionals.

Having said that, acetaminophen is an OTC drug, meaning that it is often not used under the watchful eyes of healthcare professionals. Should this drug, then, be solely prescribed? At this time, this is not being recommended. What is being advised is that acetaminophen be used only under very carefully delineated guidelines; you also need to keep the following essential facts in mind:

Liver damage/failure because of acetaminophen poisoning should not be taken lightly. In fact, it is best avoided by using the drug responsibly. Beyond that, the more you know about this potential problem, the better you will be prepared to deal with it, should it rear its ugly head around you. Although best if avoided, if you run into this problem, you will know what to look for, and what to do for best results.

Written by Fred Fletcher
Fred Fletcher is a hard working Consumer Advocacy Health Reporter. Education: HT-CNA; DT-ATA; MS/PhD Post-Graduate Certificates/Certifications: • Project Management • Food Safety • HIPAA Compliance • Bio-statistical Analysis & Reporting • Regulatory Medical Writing • Life Science Programs Theses & Dis...
View Full Profile
Comments
http://www.wellness.com/blog/13276481/tylenol-liver-damage-25-facts-you-should-know/fred-fletcher
Hi everyone Am here to testify of a great and powerful spell caster called Dr Tunde I was so confused and devastated when my husband left me without a word, I needed him back desperately because i loved him so much. So a friend of mine introduced me to this powerful spell caster who had helped her in getting her lover back, so i contacted him and he promise that in less than 72 hours he will come back to me. After i did all he asked to my greatest surprise my husband who had refuses to speak with me came back home and asked for forgiveness for all he had made me go through and now we are living happily together, if you have any relationship problem i will advice you contact him Below are his contact details via email babatundesolutioncentre1@gmail. com or his WhatsApp mobile number +2348143581382
Posted by Joan roy
http://www.wellness.com/blog/13276481/tylenol-liver-damage-25-facts-you-should-know/fred-fletcher
I read about some of this in an air line magazine back in the early 90's. How is it that the FDA still allows it to be put in other products? It is one thing to take it because it is what you want to use and another to have it being forced on us.
Posted by Camille
http://www.wellness.com/blog/13276481/tylenol-liver-damage-25-facts-you-should-know/fred-fletcher
They say you can learn something new every day...I just did! Thanks!
Posted by tabbyhamm
http://www.wellness.com/blog/13276481/tylenol-liver-damage-25-facts-you-should-know/fred-fletcher
Thank you for the update SR... we have made an update to the post!
Posted by JV
http://www.wellness.com/blog/13276481/tylenol-liver-damage-25-facts-you-should-know/fred-fletcher
Unfortunately, people tend to view OTC medications as "safe" in whatever quantities they consider necessary. Time and time again, I have watched people pop 3-4 extra strength acetaminophen or ibuprofen pills at a time and then do the same thing again 4-6 hours later. We have a much too casual attitude when it comes to non-mood altering drugs, with an increasing tolerance for the mood-altering varieties as well.
Posted by Nebraska Resident