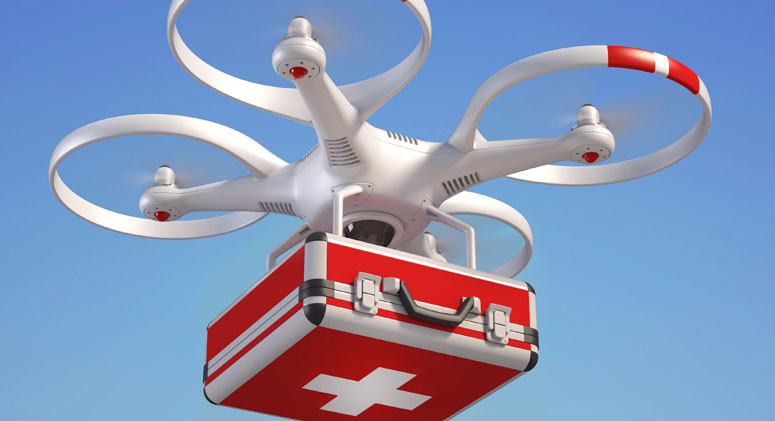 Drones are a hot news topic these days.  We've all seen (and possibly even played with) remote-controlled model airplanes and helicopters before but drones are no longer just toys.  The technology behind these devices has been greatly improved.  More importantly, people are coming up with all kinds of new, creative ways to use drones.

The government, for example, has known for a while that drones can very discreetly spy on people.  They can also keep an eye on traffic--in fact, they will probably soon be used to enforce traffic laws.  Not only can they videotape incidents but they can also allow, if the need arises, immediate interaction with people at the scene.

Perhaps the biggest (and possibly most impressive) use of drones thus far is for military purposes.  Lightweight, relatively small and capable of flying at extremely low altitudes, drones can go in, conduct an attack and get out without risking human lives.  As such, they have already established a reputation for success that is difficult to compare to anything else.

One industry, though, that may benefit from drones almost as much as (if not more than) the military is healthcare, especially in the areas of first-response emergency care, disaster relief & cost-cutting medical supplies/services delivery systems.  In essence, drones will improve healthcare not only by cutting cost and increasing efficiency but also by expanding the options available to the point (if things work out as predicted) of probably saving many lives in the long run.

This will be made possible by these new uses for drones:

1.  Flying a ready-to-deploy, user-friendly defibrillator whenever and wherever needed.  Such a device is already being tried in Europe.  Because the drone isn't affected by traffic conditions, it is capable of reaching heart attack victims much faster than an ambulance.

2.  Delivering drugs and medical supplies to shut-ins, the elderly, people without transportation, or people with communicable diseases.  This delivery system is bound to be more economical, quicker and effective than any other system to date; it also poses fewer public health infectious-disease threats. Drones are even delivering blood to parts of Africa.

3.  Monitoring traffic conditions 24/7 for strange incidents and accidents.  Most communities already have cameras on roads and highways but the cameras on drones can provide more inclusive, wider-view live information, thus helping to improve response time.  Drones can capture things stationary cameras might easily miss.  They can also be used for up-close assessments.

4.  Delivering medicines, supplies and equipment to accident and disaster victims so they can treat themselves and fellow victims.  During a major accident or disaster emergency personnel may not be able to reach people quickly--if it all, if there are more victims than trained personnel, as would be the case during a large catastrophe.

5.  Flying in communications systems to areas cut off (as during an earthquake, mudslide or flood) or too remote to reach quickly by standard transportation vehicles.  Drones can bring in up-link devices that can provide the best (and possibly only) means of communication during a major disaster.

6.  Provide looting, rioting and crowd-control roles.  These flying devices can be equipped with tear gas-firing devices, megaphone-loudness-delivered warnings, and even lethal weapons in order to disperse crowds, give people warning before lethal action is taken, and help control unruly and possibly dangerous crowds.  Such an option may prevent the deaths of law enforcement personnel who may possibly be outnumbered or overwhelmed; it can also prevent the deaths of protesters/violators, if they decide to comply with instructions given them.

7.  Help implement health education programs and initiatives, especially in unsafe areas (such as those created by civil wars or in the midst of a plague) or remote/not-easily-reached places.  This may allow health personnel to not be exposed unnecessarily to communicable disease(s) and the program/initiative can be conducted in a native language without the use of interpreters (who might also be subjected to potentially life-threatening situations).  The electronic communication (i.e., videos) could be played to the targeted population over and over again, as needed.

8.  Dropping off life preservers or floating devices to drowning victims or people falling accidentally into the water. Such devices, as a matter of fact, are already being used.  The Pars Aerial Rescue Bot is capable of helping people survive drowning.  Such devices may also be used to help people survive hypothermia (by some day also being equipped with inflatable crafts)--at least long enough till help arrives. Two teenage swimmers in Australia were recently rescued by a drone that was able to drop a rescue pod to them.

9.  Reaching victims in collapsed buildings, mines or caves.  These devices are small enough and maneuverable enough to safely reach victims more quickly and efficiently than human beings or even rescue dogs. The devices may also be used to transport meds, water, oxygen or food that may help victims survive until help arrives.

10.  Help deliver telemedicine to remote areas or to places without access to doctors or to inexperienced doctors on the field.  Doctors can more efficiently be used for massive numbers of patients if they impart their expertise remotely.  This, of course, assumes that there are trained people at the site that can carry out instructions and serve as hands, eyes and ears for doctors.  Telemedicine cuts down on transportation time, not to mention the hazards doctors must deal with both en route and while at the site.  It can also be cost-effective and efficient.

The great news about drones is that they are no longer mere Sci-fi possibilities.  While their potential has thus far only been mildly tapped into, this technology is already being used with great success to literally help people and save lives!

This is not to say that there aren't challenges and obstacles to overcome.  Like everything else, drones can be misused.  They will also be the motivation for administrative/operational issues, controversies and demands that haven't been posed by anything like them in the past.

For example, as the number of drones in the skies greatly increases, a way will have to be developed to minimize the chances of their colliding with each other or with other flying objects.  There is also the issue of privacy.  To what extent can these devices be limited so that they don't unnecessarily impose on peoples' privacy or violate any local or federal laws?

The challenges on hand, though, seem to be manageable.  More importantly, by saving lives drones can not only justify their existence but motivate more and more people to openly accept and support their use.

Written by Fred Fletcher
Fred Fletcher is a hard working Consumer Advocacy Health Reporter. Education: HT-CNA; DT-ATA; MS/PhD Post-Graduate Certificates/Certifications: • Project Management • Food Safety • HIPAA Compliance • Bio-statistical Analysis & Reporting • Regulatory Medical Writing • Life Science Programs Theses & Dis...
View Full Profile
Comments
http://www.wellness.com/blog/13282921/10-ways-drones-are-saving-lives/fred-fletcher
Hi everyone Am here to testify of a great and powerful spell caster called Dr Tunde I was so confused and devastated when my husband left me without a word, I needed him back desperately because i loved him so much. So a friend of mine introduced me to this powerful spell caster who had helped her in getting her lover back, so i contacted him and he promise that in less than 72 hours he will come back to me. After i did all he asked to my greatest surprise my husband who had refuses to speak with me came back home and asked for forgiveness for all he had made me go through and now we are living happily together, if you have any relationship problem i will advice you contact him Below are his contact details via email babatundesolutioncentre1@gmail. com or his WhatsApp mobile number +2348143581382
Posted by Joan roy
http://www.wellness.com/blog/13282921/10-ways-drones-are-saving-lives/fred-fletcher

Good article, Fred! There's no doubt that telemedicine is the thing of the future. In the past doctors would come to your home. In the future only the rich will ever see a doctor in person. That's my prediction.
Posted by Amber Cruz
http://www.wellness.com/blog/13282921/10-ways-drones-are-saving-lives/fred-fletcher
Drones are a very promising type of relatively new technology. These and similar devices will usher in some amazing possibilities. Good read, my friend.
Posted by Dr. Dario Herrera
http://www.wellness.com/blog/13282921/10-ways-drones-are-saving-lives/fred-fletcher

I'm sorry but when I think of "drones," I think up some very bad associations. Drones have made indiscriminate killing more impersonal, less easy to trace, easier, and less expensive. But I admit that as a social activist my views are somewhat biased. It's nice to know, Fred, these things have a useful purpose. Always enjoy reading your stuff, Sugar.
Posted by Christiana Ayimba, PhD

How To Avoid Diabetes While Eating Fruits
Nidhi Thakur

Are You Getting Enough Vitamin D?
Joel Fuhrman, M.D.

Could a Parasite Be the Key to Treating Autoimmune Diseases?
Wellness Editor