Why I’m Trying A Vegan Diet

Recently, I went on an impromptu trip to Salt Lake City for a concert and found motivation to change my diet after eating at a phenomenal vegan diner. This is all part of a cumulative effect that’s taken hold of me recently, as I’ve become increasingly conscious of everything I eat.

While I’ve experimented with vegetarian and pescatarian diets over the years, I’ve always had the mindset that I’m not capable of ‘giving up’ so many common foods for a vegan diet. How could I possibly be happy without eating cheese or ice cream every once in awhile? And what about my go-to breakfast of Greek yogurt and oatmeal?

But Why Switch to a Vegan Diet?

There’s a multitude of reasons for someone to pursue a vegan diet. While everyone’s diets vary, the case for veganism is mainly centered around providing yourself with better nutrition. Vegan lifestyles are also much more ethical and far less wasteful than the diet choices of those who eat meat far too frequently.

Many people believe that meat and animal products are essential to human health. They believe that it should be eaten daily, or even for every meal. However, what this often relates to, is an unbalanced diet. Over consumption relates to poor health and oftentimes obesity.

Too much meat is also certainly bad for heart health. Similarly, overconsumption of simple carbohydrates causes diabetes. Too much of something is generally a bad thing except when it comes to plant-powered diets. Diets centered on produce, raw foods, and natural foods are healthier than other Americanized diets.

Additionally, when you switch to a vegan diet and also remain conscious of weeding out processed foods, you’ll be lowering your chances of coming into contact with a major health risk: chemical contaminants in food. When you make the choice of eating foods that don’t contain unnecessary chemicals and preservatives, you lower the chance of exposure to these types of issues.

A vegan diet is considered to be cruelty-free for the simple fact that by choosing this lifestyle you are sparing the lives of innocent animals. The meat industry is brutal to say the least. Animals are treated less like living creatures and more like a means of simply generating income.

Websites such as PETA.org have channeled massive amounts of mainstream attention surrounding the inhumane conditions farm animals must indure over the course of their short lives. These animals have been rapidly bred and raised simply for the desires of humans to overconsume. In some cases, animals are so overloaded with growth hormones that they can no longer walk properly.

One of the most foundational and crucial substances on earth is water. Being mostly water ourselves, we obviously need it to survive. Some areas of the world are so privileged that people overlook the importance of water. They are blinded by convenience and have never had to deal with water scarcity or a lack of accessible, clean water.

It may come as a surprise that by 2025, it’s estimated that 50 percent of the world will be experiencing severe water-stressed conditions. One of the best ways to help conserve water is to be conscious of how much it takes to produce the foods we typically eat.

The images below, created by Edible Madison, showcase the staggering amount of water that is used to produce a pound of meat or cheese.

Raising animals for food requires an excessive amount of water. Livestock need water to drink. They also need to be cleaned, and their stalls washed out, and using copious amounts of water is the easiest method. Water is also used during the slaughtering, packing, and transporting phases.

Timing is on my side, as I need to go grocery shopping today. I’ll post my progress and an update piece in about week. This will cover exactly what I ate, how I prepared it, and why I chose the vegan products I did. Please post any suggestions or recipes in the comment section below.

And if you’d like to join me in trying a vegan diet, consider adding the goal Becoming Completely Vegan. 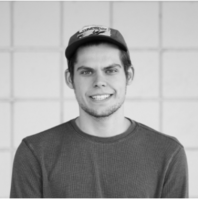 Written by Robert Parmer
Robert Parmer is a health and fitness enthusiast, a freelance web writer, a student of Boise State University and a chef. Outside of writing and reading adamantly, he enjoys creating and recording music, caring for his pet cat, and commuting by bicycle whenever possible. He considers himself both a health foods and non-s...
View Full Profile
Comments
Be the first to leave a comment.
6 Possible Reasons for the Obesity Epidemic In America
Andrea Bradshaw